Rick and Morty Wiki
Register
Don't have an account?
Sign In
Advertisement
in: Pocket Mortys, Characters, Male Characters,
and 4 more

Unknown dimension in the multiverse

Close Rick-counters of the Rick Kind
Alien Rick is an alternate version of Rick Sanchez with alien-like appearance.

He was one of the many Ricks to attend Rick (C-137)'s trial before the Council of Ricks in "Close Rick-counters of the Rick Kind.

In The Rickshank Rickdemption, he was talking with Black Rick and another unnamed Rick. Morty and Summer were escorted past them on their way to the Council of Ricks.

In the same episode, many Ricks are killed when the Citadel of Ricks is transported into a prison of the Galactic Federation. It is unknown if Alien Rick is one of the Ricks who died.

Alien Rick is an alien old man. He has slimy lime-green skin and antennae on his head. He has light blue spiky hair and a unibrow. He has three eyes, with one of them on his forehead, a big nose, elf-like pointed ears and four arms. He wears a light blue shirts and a white lab coat with extra sleeves for his two additional arms.

Badge, Schmeckles, Random item
Alien Rick is an alien-version of Rick who can be found in the game Pocket Mortys. He has a random team of Mortys.

He speaks an unintelligible alien language. 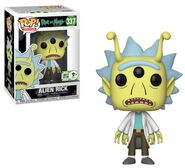 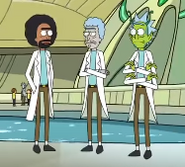 Alien Rick talking with Black Rick in The Rickshank Rickdemption