Rick and Morty Wiki
Register
Don't have an account?
Sign In
Advertisement
in: Antagonists, Characters, Female Characters,
and 5 more

Beth's Mytholog is a physical representation of the way Jerry perceives Beth that went rogue and tried to take over the universe. It appeared in the episode Big Trouble In Little Sanchez.

In the episode Big Trouble In Little Sanchez, when Jerry wears the Mytholog helmet, Beth's Mytholog is created, much to Beth's offense. She later creates Jerry's Mytholog in retaliation.

Beth's Mytholog proves to be both cunning and strong, using Mytholog Jerry's unique abilities and her own brute strength to break free of their holding chamber and kill most of the staff. She later captures Beth and forces her to make more Mytholog Jerrys via the Mytholog helmet, in order to create a subservient army to aid her in universal conquest. She is then stopped after Beth creates several Ideal Jerrys, one of which creates Goddess Beth, who vaporizes the Beth Mytholog.

Beth's Mytholog is a massive quadrupedal monster with four insectoid arms and legs, four breasts, an elongated head with Beth's face framed by a set of giant mandibles, and a large scorpion-like tail. Her claws and fangs are razor-sharp, and combined with her strength allows her to tear down walls, bend metal girders, and rip apart others with ease. Her body is covered with a thick, black exoskeleton adorned with several rounded, transparent lobules. She only roars and growls throughout most of the episode, but when she is creating her army of Jerry Mythologs, she speaks to Beth in a lower, more guttural version of Beth's voice.

Being based on how Jerry views Beth, Beth's Mytholog is a highly exaggerated parody of Beth: a strong and cunning, yet caustic and cold-hearted beast with a massive ego and lust for power and control. She describes herself as the strongest, smartest being alive, simply because Jerry thinks Beth as being that much stronger and smarter than she really is. Mytholog Beth is also highly intelligent, immediately seeing the usefulness in Mytholog Jerry's unwavering subservience and shapeshifting abilities, which she uses to quickly evade detection and escape from her cell before destroying and taking over the facility on Nuptia 4. 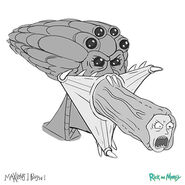 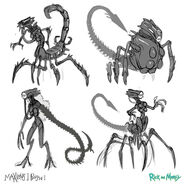