View source
watch 01:23
Wiki Targeted (Entertainment)
Do you like this video?
Play Sound

Deceased (as Birdperson)
Deactivated (as Phoenixperson)

“In bird culture, this is considered a dick move.”
—Birdperson, regarding Morty abandoning Rick[src]

Birdperson, currently known as Phoenixperson, is a once friend, and now foe, of Rick Sanchez. He has known Rick for a long time, and has seemingly known Morty since he was a baby, as revealed in the episode "Get Schwifty". As of the finale of Season 4, his cyborg form is dismantled and in Rick's possession.

He was first introduced in the episode "Ricksy Business", where he attended Rick's party looking for a new mate after ending his soul-bond with his previous spirit-partner. At the end of the episode, he gets back in the saddle with one of Summer's high school friends, Tammy. He and Tammy later get married, only for Tammy to reveal herself as a Galactic Federation agent out to kill Birdperson, arrest Rick, and all of his associates. Despite being shot multiple times, Birdperson is soon resurrected by the Federation as the cyborg Phoenixperson in order to serve them. In "Star Mort: Rickturn of the Jerri", Phoenixperson - under the control of the Galactic Federation - comes face to face with Rick, and fights him, almost killing him, before being shut down by Space Beth.

Phoenixperson currently resides in Rick's garage lab, until Rick could find a way to fix his friend.

Birdperson first appears in "Ricksy Business", where he attends Rick's party and hooks up with Summer's friend, Tammy. He is also one of the very few party-goers who remains behind to help clean up, although he may have just been waiting for Tammy to be ready to leave.

When Morty shows his frustration at the party's mess as it would mean no more adventures with Rick if his parents see the house in this state, Birdperson informs Morty that "Wubba lubba dub dub" means "I am in great pain, please help me" in his native language. Morty is skeptical that Rick actually means this, though this knowledge spurs him to eventually press Rick into action to preserve their ability to go on adventures together.

Birdperson later reappears, along with Tammy, in the episode Get Schwifty, where he saves Morty's life after the latter jumped through numerous, hostile dimensions before collapsing from exhaustion. He explains to Morty that leaving Rick was a "dick move", and that Rick really does care about him. Furthermore, if it wasn't for Rick, he [Birdperson] would be dead and would never have met Morty. He then recharges the Portal gun and sends Morty back to Rick.

In "Get Schwifty," it can be noted that Birdperson and Rick have been acquainted for years, as there are many picture frames containing Rick on his wall. During Birdperson's early adulthood, he, Rick and Squanchy formed a band called "The Flesh Curtains", where Birdperson was featured as the main singer. Birdperson can also be seen beside a younger Rick, and some sort of aircraft.

In "The Wedding Squanchers", he and Tammy get married and have a huge wedding party. During this time, he confessed to Beth that he and Rick are wanted by the Galactic Federation for committing "crimes in the name of freedom" which Beth shrugs off. Shortly after, during the reception, Tammy reveals herself to be a member of the Galactic Federation's secret service and shoots Birdperson multiple times, followed by a shootout with the rest of the criminals in the room.

Birdperson makes a cameo appearance in "The Whirly Dirly Conspiracy", in the form of a small statue that can be seen in the background.

Until her identity was revealed to be false, Birdperson was a devoted love interest to Tammy. He was calm and conservative while she had no filter in the things she said, no matter how inappropriate. It was revealed in the commentary for "Get Schwifty" that the creators were displeased with how the way things ended, finding humor in their brief relationship. Harmon and Ridley in particular considered recreating that formula in some way, admiring the dynamic between Tammy and Birdperson.

In the ending credits for The Rickshank Rickdemption, Tammy and the Gromflomites resurrected Birdperson as a cyborg and renamed him Phoenixperson. Although Tammy wanted his name to be Cyberbird, she didn't push hard enough to make that official. She settled on Phoenixperson and took off with him.

In "Star Mort Rickturn of the Jerri", Rick comes face to face with Phoenixperson where they briefly talked and they started fighting as soon as Rick said that he killed Tammy. Phoenixperson flew into a rage and fought Rick to the death. During their fight, Rick mentioned how he wondered who would win in a fight between them and Phoenixperson replied that Rick was always a bad friend. The fight seems to gain in favor of Phoenixperson, as Rick is suffering from massive injuries to the point where his cyber-augmented intestines spill out. Just before Rick was about to accept his death, the fight was interrupted by both Beth and her counterpart Space Beth. However, Phoenixperson ended the fight quickly. Just before he can kill Rick, Jerry (equipped with the invisible belt) used Tammy's corpse to pretend that she was still alive. Phoenixperson was surprised but was suspicious by how she was acting. Jerry then trips on top of the corpse uncloaking himself. Phoenixperson once again flew into a rage. However, Beth flicked the off switch, which was foolishly installed on the back of Phoenixperson and caused him to shut down next to the dead Tammy. In the end, Rick kept his body behind his storage shelf in the garage but in pieces. He turned on Phoenixperson briefly to check if he can still speak with him but Phoenixperson was still angry thus, causing Rick to shut him down again until he calms down.

Birdperson is a tall humanoid with bird-like features. He has two giant eagle wings with gray on the ends, that drape down along his back like a cape. He also wears yellow gloves, a red skirt, and yellow boots. He has a green, feathery helmet with white polka dots. The tuft of feathers on his head ruffles when he moves.

As Phoenixperson, his bird feathers are replaced with metal. His wings are now completely cybernetic. Most of his legs and torso are now completely robotic. He also has one red eye, and minor patches of slightly discolored skin. He also loses his feather helmet in place of a 3 feathered metallic plate.

Birdperson is very wise, having experienced so much about the universe with his best friend, Rick. He offers well-meaning advice to anyone willing to listen to him, like Morty. He is also very nice, although, at times, he can be perceived as tedious, most notably to Beth, because of his monotone voice, limited facial expressions, and scarce bodily movement.

Birdperson and Rick are life long friends, having done lots of things together - like being in a band, and being terrorists against the Galactic Federation. Birdperson attended Rick's party in the episode Ricksy Business. He showed concern for Rick's well being, telling Morty that "Wubba Lubba Dub Dub" means "I am in great pain, please help me". He invited Rick to his wedding in the episode The Wedding Squanchers. In the same episode, Rick was shown to be very torn apart when he saw Birdperson die. Birdperson also has a picture of Rick holding a baby Morty, alluding to an unknown history with an alternate Morty.

When Rick learned of his fate in "Star Mort Rickturn of the Jerri", he was upset and tried to cheer him up by revealing his killing of Tammy but this caused him to be attacked. Prior to this, Rick called Birdperson his best friend but did mention he wondered who would win in a fight between them, as Birdperson called him a terrible friend. Birdperson would have killed Rick if he hadn't been saved by his family and Birdperson was shut off. In the end, Rick salvaged his incapacitated friend and keeps him in the garage lab, presumably to help him but he is wise to keep the latter shut off until he is calmed.

Birdperson and Morty are fond acquaintances of each other. Birdperson explained Rick's catchphrase to Morty in the episode Ricksy Business, and offered him his advice. He also nursed Morty back to health when he found him wounded in the episode Get Schwifty. In that same episode, Birdperson also serves as a form of guidance for Morty, bestowing a lot of wisdom on him and explaining to him why he should consider putting his faith in Rick Sanchez.

Birdperson and Tammy met at Rick's party, where they fell in love with each other in the episode Ricksy Business. In the episode Get Schwifty, it was revealed that the two of them have since lived in the same house together. In the episode The Wedding Squanchers, they wed, but it turned out that Tammy was an undercover agent who married Birdperson as a front to catch him and all the other criminals in the room, meaning that all her feelings for him were fake. Birdperson was distraught and tried to speak with her before she promptly killed him. However, she does revive him at the end of "The Rickshank Rickdemption", implying that either she really does love him or has further use of him in capturing Rick.

In "Star Mort Rickturn of the Jerri", he flew into a rage and nearly fought Rick to the death when Rick said that he killed Tammy. Phoenixperson was also shocked to see her corpse (being used as a puppet by Jerry) and thought it was Tammy alive but this distraction allowed the Smiths to shut him down.

Birdperson and Squanchy have apparently also been friends for a long time. In the episode Get Schwifty, it was shown that, when they were much younger, he, Birdperson, and Rick started up a band together, called The Flesh Curtains. Squanchy was also honored to hold Birdperson and Tammy's wedding on his home planet.

During her conversation with Birdperson in "The Wedding Squanchers", Beth tells Birdperson how she used to draw Rick into her family photos with a crayon. Birdperson told Beth how he fought alongside him against the Galactic Federation. Beth was saddened by this. She is envious of Birdperson for all the time he spent with Rick. In spite of this, she is very supportive of him on his wedding day. 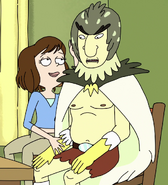 Birdperson and Tammy at their wedding

Birdperson as Phoenixperson about to fly off.

Phoenixperson and Tammy flying off 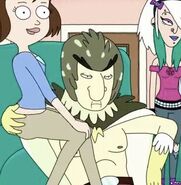 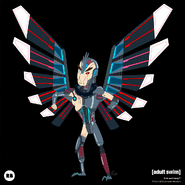 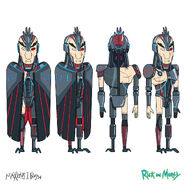 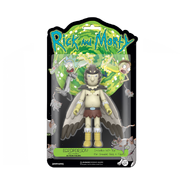