A Boobloosian couple was present at Nuptia 4 to receive counseling for their marital issues, but were later killed when Beth and Jerry Smith's mythologs decided to break out of their cells and go on a murderous rampage.

A similar couple attended Tammy and Birdperson's wedding on Planet Squanch in "The Wedding Squanchers". They left shortly after the ceremony and avoided the Galactic Federation's raid.

Boobloosians are aliens that have light yellow skin, two green eyes, are around three feet tall, and have pale yellow marks on their foreheads. Their foreheads are the biggest part of their face. Their blood color is bright purple. 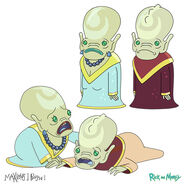 Boobloosian Couple design
Add a photo to this gallery
Retrieved from "https://rickandmorty.fandom.com/wiki/Boobloosians?oldid=56867"
Community content is available under CC-BY-SA unless otherwise noted.