Cat People are an unnamed race of intelligent humanoid cats who populate the Purge Planet.

The Cat People live in an amish-like lifestyle where they do not make use of electricity or most other modern tools. Most Cat People appear to be farmers or working at markets, while a few select live in huge mansions and dress in more prestigious clothing. Cat people utilize their own written language for signs, even though they speak English.

There existed a small elite of wealthy cat people who most likely had descended from the creators of The Purge. These people lived in large mansions and cut themselves off from the rest of the people, considering them poor and beneath them. They had kept the festival going for thousands of years in order to keep the working and poor class down and hinder them from opposing the rich elite. Each year during the festival they would barricade themselves inside the Purge Planet Ruler's mansion and celebrate yet another successful purge.

Rick and Arthricia ended the planet's elite when they stormed their mansion while wearing combat suits and killed off all the inhabitants.

The Purge is an annual event, called The Festival by some, which takes place over a period of twelve hours. During The Purge, all crimes including murder are permitted. According to Purge Planet Ruler, the festival has been arranged for thousands of years. Though some, like Arthricia, are opposed to the event; others look forward to it all year, like General Store Owner.

Rick and Morty's visit to Purge Planet ultimately brought the original festival to a close by killing off the wealthy elite who kept the festival going each year. However, a second purge festival was proposed after they left as the remaining cat people had too much aggression to live normal lives without it.

Most Cat People met by Rick and Morty have shown violent tendencies and short tempers. It is unknown if this was what led to The Purge, or if it's a result of it. They have appeared to be quite selfish, with Arthricia stealing Rick's Space Cruiser and the farm people going after each others throats after nothing but a short argument. This could a result from growing up with the purge festival and the planet's rulers encouraging the lower people to participate. It could also be the original reason for why the The Purge began in the first place.

Intelligent cat people can be traced back thousands of years, due to the purge festival having been stated to be as old. They have most likely been visited by aliens in the past, as a cat person was not surprised or frightened by Rick or Morty when they landed by him in their spaceship.

The Cat People were visited by Rick and Morty after a large spacebug crashed into their windshield and they were out of wiper fluid. Incidentally, the very same day they landed on Purge Planet was the day that The Purge festival was to be held. The first people they encountered were looking forward to the festival, but Morty was anxious to leave before it's beginning. The plot of the episode Look Who's Purging Now takes place around this purge festival.

General Star with a group of purgers came over Rick and Morty as they were walking in a grassy field. They were quickly killed off by Rick and Morty once their combat suits had arrived. More cat people were killed by Morty when they arrived in town, even some who were merely hiding from purgers.

Rick and Arthricia flies into the mansion of the planet's ruler where they shoot everyone inside to take revenge for previous purge festivals and stop them from arranging new purge festivals. After this was done, the inhabitants of the nearby village were without leadership or economic systems. Before they managed to work out a basic trade system, they turned on each other, which resulted in the proposition to host an annual event to let out the murderous anger they all have pent up.

Cat People have the appearance of a cat, but is the size of a human. They have normal, human-like hands while their feet have not been seen. They wear dress and speak similar to humans, even having built similar social systems. Cat People's bodies are covered in fur and they have two ears sticking out on the top of their head. Even with fur, they still have more prominent hair on their heads, once again adding to similarities to humans. 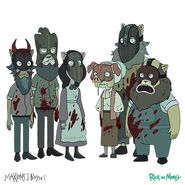 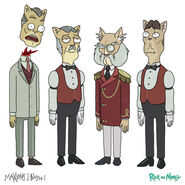 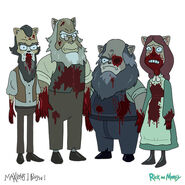 Bloody Cat People design
Add a photo to this gallery
Retrieved from "https://rickandmorty.fandom.com/wiki/Cat_People?oldid=62380"
Community content is available under CC-BY-SA unless otherwise noted.