The Council of Ricks was the governing body over all Ricks who joined them. The Council was created when Ricks from multiple dimensions decided to form a way for Ricks to protect one another from their enemies across realities and ruled from their secret headquarters known as "The Citadel."

Though predated by another group in leadership in the Citadel, the Council consisted of six Ricks who stood out from the rest. The spokesman for the Council was Riq IV. The other Council members were Rick Prime, Quantum Rick, Maximums Rickimus, Zeta Alpha Rick, and Ricktiminus Sancheziminius. Rick C-137 was offered a spot on the Council but adamantly refused it, condemning the Citadel. Afterward, they deemed him "the rogue," for he is one of the few Ricks, along with The Scientist Formerly Known as Rick, who refused to comply with the Council's rules.

The Council of Ricks were capable of giving Ricks a Morty in the event that the Morty from their timeline dies. To the Council and most Ricks, Mortys are nothing more than cloaking devices to hide Ricks from dangers. Some Ricks in the Citadel go so far as to sell accessories and insurance for Mortys, treating them like objects and accessories. Mortys living in the Citadel are second class citizens.

The Council had military forces consisting mainly of uniformed Ricks (Citadel's militia), although several Mortys served as soldiers of the Council as well as assistants. A small part of the Council's military was the SEAL Team Ricks, a special forces unit consisting of five Ricks who were all killed when encountering Rick C-137 while on a mission to assassinate him.

The Council had the capability to impose punishment on those they convicted of crimes, one of such sentencings was to the Machine of Unspeakable Doom which "swaps your conscious and unconscious minds, rendering your fantasies pointless while everything you've known becomes impossible to grasp. Also every ten seconds it stabs your balls."[1]

The Council made their first appearance in Close Rick-counters of the Rick Kind. When 27 Ricks were found murdered and their respective Mortys kidnapped, the Council of Ricks ordered the arrest of Rick C-137 and accused him of the crimes due to his refusal to participate in their affairs. Angry that he was framed, Rick escaped the Council with his respective Morty to go after the real culprit who set him up, finding that another Rick is supposedly responsible for murdering their counterparts while stealing their Mortys to conceal his presence.

After Morty leads a rebellion of alternate Mortys against the "evil" Rick, a few members of the Council made an appearance at the crime scene to help their militia gather up Mortys to send back to their original dimensions. At the Citadel, the Council begrudgingly rewarded Rick with a ticket, making him eligible for a Free Replacement Morty, in the event that his current Morty is injured or killed.

In The Rickshank Rickdemption, the Council ordered the assassination of Rick C-137 due to his being captured by the Galactic Federation. Because of this, Rick C-137 teleported the Citadel into a Galactic Federation Prison, which resulted in the deaths of countless Ricks and Mortys. During the ensuing chaos, Council was infiltrated by Rick C-137, either disguised as Quantum Rick or using Quantum Rick's body as a host, who then proceeded to take the other Council members by surprise and shoot three dead, electrocuting the fourth. With the help of Morty and Summer, Rick C-137 was eventually able to murder Riq IV, as well.

The fate of Quantum Rick is unknown, but it can be presumed that Rick C-137 showed him no mercy, as with the others.

A Rick soldier under command of the Council

Rick soldiers under command of the Council 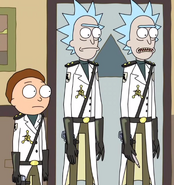 Soldier Ricks with a soldier Morty 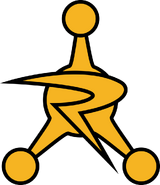 the corridor leading to the Council Hall 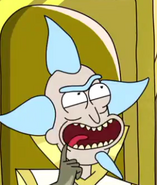 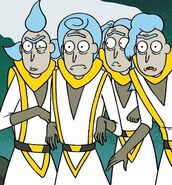 Aerial view of the council hall

Council of Ricks, all members from the front of the stage
Add a photo to this gallery

Retrieved from "https://rickandmorty.fandom.com/wiki/Council_of_Ricks?oldid=69259"
Community content is available under CC-BY-SA unless otherwise noted.