Death Stalkers is a group of cannibals living in the desert wasteland on post-apocalyptic Earth. They dress in leather and spikes, and cover themselves in graffiti. They roam the desert in their own self-built cars and hunt Post-Apocalyptic Mutants in what used to be Seattle.

The Death Stalkers consist of humans who left Seattle after a large nuclear explosion, the "boom boom", destroyed the city. Their language would slowly change to repeat a part of a word instead of saying it entirely. They grew to love violence and eat human flesh due to the shortage of plants and animals.

The Death Stalkers was led by Colossus when they chased Rick, Morty and Summer at the beginning of the episode "Rickmancing the Stone". Summer shot his vehicle and sent him flying above her, before mercy-killing him due to his sustained injuries. Hemorrhage took over as leader and brought the Smiths and Rick back to their camp. 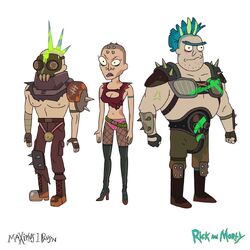 Retrieved from "https://rickandmorty.fandom.com/wiki/Death_Stalkers?oldid=70477"
Community content is available under CC-BY-SA unless otherwise noted.