Matt Besser
Fungo is an alien character who appeared in the episode Interdimensional Cable 2: Tempting Fate. He is one of the two diplomats who along with Yaarb tries to convince Jerry Smith to donate his penis to Shrimply Pibbles for heart surgery.

The Blue Diplomat is a blue-skinned alien with a couple of red stripes that start on his forehead and go down the back of his neck. The top half of his face is wider that the lower half and his eyes and has two yellow-colored eyes with irises that are shaped like roosters. He wears a green and tan robe. 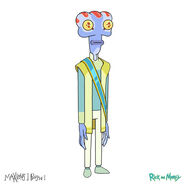