Rebranded as The New Galactic Federation

“For over 850 glaagnars, the Galactic Federation has helped quintillions of other sentient life forms assimilate into our vision of one united universe. We stand scrung in scrung with thousands of planets; perhaps yours will be next!”

The Galactic Federation was a major galactic or intergalactic organization which controlled significant areas of the universe until it was dismantled by Rick in The Rickshank Rickdemption. There was a surviving part of the militia, seemingly run by Tammy Guterman until her death in Star Mort Rickturn of the Jerry.

In the episode The Wedding Squanchers, it's revealed that there are 6,048 earth-like planets in the Federation including Earth, which joins it at the end of the episode.

The Federation government is served and also ruled by the bug-like Gromflomites,[1][2] although it includes members of many other species.

Rick Sanchez, Birdperson, and Squanchy are known to be rebels against the organization, fighting numerous battles to free various planets from its control and committing many "atrocities" against it in the process.

It's also revealed that Tammy, along with her supposed parents, were undercover agents for the Galactic Federation in order to catch the rebels affiliated with Birdperson and Rick. At the end of the episode, Earth officially joins the Federation opening it to direct alien contact and tourism.

The Galactic Federation falls into anarchy in The Rickshank Rickdemption once its currency becomes worthless. It does not appear to be in any position to rebuild.

The currency of the Federation is Blemflarcks, although they appear to simply be called "Federal Credits" on Earth. Upon the Smith's return to Earth in The Wedding Squanchers, a passing Federation robot offers Jerry Smith complimentary antidepressant pills then directs him to the Ministry of Employment where he will be assigned a job to work off his 7,000 credit debt. . All Federation jobs on Earth appear to pay only pills.

The Galactic Federation runs on its own calendar, which appears to be much faster at roughly 2.6 Federation years to one Earth year. Using a Federation year as GFY and an Earth year as EY, the approximate number of GFYs to 1 EY can be calculated using Summer and Morty's respective ages:

Using this method we receive two different answers. As Morty and Summer are not exactly 14 and 17, these results will be slightly off.

Interestingly, there is no possible ratio of GFY:EY which would work for both Summer and Morty if they were 17 and 14 respectively, and their GFY ages seem to suggest that Summer may be 18. To find Summer's lowest possible age using her age in GFY, we need the smallest possible value of one GFY. Assuming that Morty is exactly 14 EY and nearly 36 GFY, we can find the highest ratio of GFY:EY (2.57 GFY to one EY) and thus the smallest GFY value. Dividing Summer's age by this ratio would give Summer a minimum age of 18.29 EY. As we know that Morty is not exactly 14, she must be a bit older.

This assumes that the Galactic Federation measures its years linearly. Using quadratics or other functions to measure time would produce very different results, and would preclude easy translation of GFY -> EY. It also assumes that GFY ages start at 0.

In The Rickshank Rickdemption, the Citadel of Ricks is teleported into the Galactic Federation prison by Rick C-137, causing a massive outbreak. Rick set the value of the Blemflarck to 0, essentially making it worthless. With no money, the Federation quickly fell apart into anarchy.

As soon as Blemflarcks became worthless, the President of the Federation committed suicide. The Federation collapses in on itself, causing many of their ships to leave Earth and violence to break out. As of now, the Galactic Federation is considered to be a defunct government. However, some holdouts continue to remain in operation.

The military branch of the Galactic Federation is referred to as the Galactic Militia, and is shown to be primarily comprised of Gromflomite soldiers. Other Federation security forces, which may be part of the same organization, include prison guards and Interdimensional Customs agents. In the post-credits scene for The Rickshank Rickdemption, it's shown that the previously presumed-dead Birdperson has been converted by Tammy into a cybernetically-enhanced galactic enforcer.

Some individual member-worlds of the Galactic Federation have their own native police forces, such as Gear World.

The Federation has been shown to possess guarded security checkpoints, including one on Earth shown at the end of The Wedding Squanchers, as well as control over the galaxy's Interdimensional Customs as shown in the Pilot. Additionally, a high-security Federation outpost is featured in Mortynight Run.

It also possesses numerous prisons, one of which Rick was taken to at the end of The Wedding Squanchers. However, in The Rickshank Rickdemption, the prison which held Rick is destroyed as a result of him teleporting the Citadel of Ricks into the middle of the prison.

The prison where Rick was held was also used to hold the most wanted and most sensitive data. Anyone with level 9 access would have the ability to change just about anything. Rick used this to his advantage by reducing the value of the Federation's currency from one to zero, which caused mayhem and infighting within the government.

However, it didn't spell the end. The New Galactic Federation rose from the ashes of the old one, this time turning its attention away from Rick, realizing that if he was left alone, he wouldn't threaten them.

At first glance, The Galactic Federation appears to have a democratic structure modeled after the United States' government, overseen by a president from an extraterrestrial "White House", but the process of how these presidents come into service is unknown. However, there are signs that the Galactic Federation may be a species-based oligarchy instead.

In The Wedding Squanchers, Rick implies that their prisons are cruel towards their prisoners. He states that the family may be tortured in order to find out Rick's whereabouts, should they return home. It's unknown whether or not this is true. However, in The Rickshank Rickdemption, the federation shows very little consideration for Rick's well-being while trying to get information out of him, using a brain analyzer that would be capable of destroying his brain. It's suggested that they had no intention of turning the machine off after getting the information out of him.

They also appear to be financially hypocritical. In The Wedding Squanchers, Jerry was served pills that were ostensibly "complimentary", but put Jerry 7,000 fed credits in debt. Human workers (such as Jerry) were also not paid with money for their work (the official currency being the Blemflarck), but instead in basic resources, which in this case takes the form of pills instead of food. This can also be symptomatic of dictatorships.

The takeover of Earth is generally shown as invasive. Earth didn't become a member of the Federation willingly, and most of its inhabitants were unsatisfied with the takeover. A mandatory curfew was enforced and many of the articles on the Federation social media site Fedconnect suggest that experiments had been done on humans without their consent, and that humans were under constant surveillance. This is most likely not unique to Earth. It's also implied that the Galactic Federation destroys planets, as Scropon, who was apparently a rebel against the Federation, fell victim to his planet getting destroyed. All of this implies that the Gromflomites view humans and other alien species as second class citizens.

Rebel factions against the Federation exist, one of which is led by Birdperson. These factions claim to fight against the government in the name of freedom. Rick, Summer, and Mr. Goldenfold all openly disagree with the Federation's apparent oppressive nature. 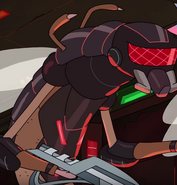 A squad of Gromflomites (note squad leader in black) 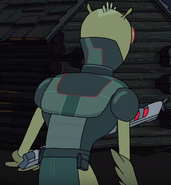 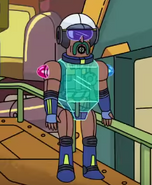 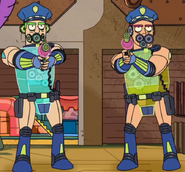