"Ricksy Business"
The Gear People are a race of bio-mechanical aliens whose physiology, technology, and society is built largely on gears. The most notable gear person in the series is Rick's friend Gearhead, an engineer and expert on the "Gear Wars".

Gear People bodies resemble large action figures, having visible seams along their limbs and bodies similar to plastic toys. Their blocky, rigid torsos are made of brightly-colored transparent plastic, with an array of churning gears visible within. Their limbs and heads are flesh-colored and opaque, and though their eyes and noses are human-like, Gear People have one to three turning gears where their ears and mouths would be. Some have hair as well as facial hair, and their crotches have small doors that hold their gear-shaped genitalia. Gears on Gear People are removable, as Rick once demonstrated by pulling out Gearhead's mouth-gears and replacing them with his own "gear-sticles".

The gear people's diet consists of gears and gear-like foods, such as "Gear Cream" (a gear-based analogue for ice cream). When sickened, gear people will vomit a stream of small gears. 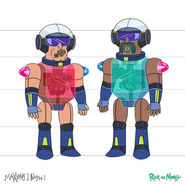 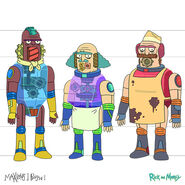 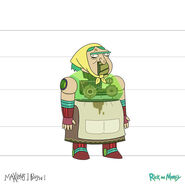 Gear Babuska
Add a photo to this gallery
Retrieved from "https://rickandmorty.fandom.com/wiki/Gear_People?oldid=68667"
Community content is available under CC-BY-SA unless otherwise noted.