Rick and Morty Wiki
Register
Don't have an account?
Sign In
Advertisement
in: Article stubs, Characters, Male Characters,
and 2 more

The Old Man and the Seat

Taika Waititi
Glootie is a character that first appeared in "Introducing: Glootie!" and later "The Old Man and the Seat". He works as an intern for Rick Sanchez, and is appropriated by Jerry Smith, with the job of making a dating app titled "Lovefinderrz"[1]

Glootie seems to be a shiny, slimy, pink alien creature with four blue eyes, a purple mustache, and glossy pink lips. He is short in stature and has white claws on his fingers. Glootie wears an aqua blue jumpsuit with the logo of his app company on it. He has "DO NOT DEVELOP MY APP" tattooed on his forehead.

Glootie is usually a friendly and helpful alien. He doesn't seem to have any issues with existing as an intern or helping Rick with his menial tasks. A notable aspect of his personality is his insistence to create an app; if Glootie interacts with someone, it appears he will most likely ask them to develop an app with him.

After Jerry partners up with Glootie to develop Lovefinderrz, a more cunning side to Glootie is revealed. Glootie is actually part of a scheme conjured up by the Monogatron's to take Earth's water, using Lovefinderrz as a distraction. When Morty attempts to force Glootie to shut the app down, Glootie feigns having a bomb in his pocket with a sinister beeping app, causing both Jerry and Morty to flee. However, once he is immediately caught, Glootie is shown to be extremely submissive and willingly takes Jerry and Morty to the Monogatron's mothership, despite them not having any weapons.

Once on board, Glootie demonstrates quite a bit of selflessness by setting Jerry and Morty free from a prison and shutting down Lovefinderrz permanently. It is unknown if this makes Glootie an exception within his species or the intervention of Jerry and Morty changed him. Whilst he was shown to be selfless in this act, Glootie casually told the pair he wasn't going to help them anymore than removing their shackles and promptly left them to escape on their own. This is possibly due to him not being a master tactician and knowing he wouldn't really be much use beyond that point anyway. 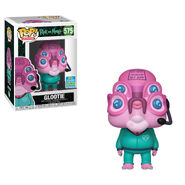