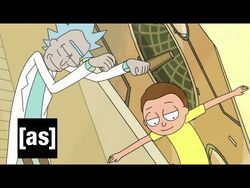 "Head Bent Over" is a song sung by Rick, Morty, and the President in the episode "Get Schwifty."

As with "Get Schwifty," this song was genuinely liked by all of the Cromulons and the popularity of the song amongst them was entirely unanimous. This song was chosen to be the winner of the final season Planet Music as well as the reason why Planet Music ended. However, despite all of the achievements that this song managed to make, "Get Schwifty" is still more popular and iconic amongst real-life audiences.