Joel McHale
Hemorrhage is the leader of the Death Stalkers, a group of inhabitants of the Post-Apocalyptic Dimension, where he acts as a hunter, killing the inhabitants which did not change along with his group. He is shown to be very capable of driving and has excellent shooting skills. He appeared in "Rickmancing the Stone".

Though he has limited memory of life before the apocalypse called "Boom Boom", he assumes he was still only a child or teenager with loving parents, giving him a normal happy lifestyle. Unfortunately, the apocalypse took that away from his parents, and later, the couple died, and he was forced to adapt to the post-apocalyptic environment, by fighting and killing just to survive and he grew up under these conditions, making him who he is today.

During the episode, "Rickmancing the Stone", Hemorrhage's gang attempted to murder Rick, Morty, and Summer. Though Colossus seems to be leading the Death Stalkers in the chase, Hemorrhage filled the office after Colossus' death, claiming that Summer removed "weak blood" from the gang.

He and the crew ceased fire and wanted the trio to join them, and Rick ecstatically complies. Hemorrhage develops a friendly bond with Summer, especially, and taught her about his depressing, horrifying customs. In the process, he found out she had just about the same thought process as he did. Friends became lovers and he became comfortable with showing her his true face, which he had never done to anyone else, without killing them shortly after. They then passionately made out, had sex, and Summer took on his lifestyle.

After three weeks, Hemorrhage and Summer had gotten married and moved into the post-apocalyptic equivalent of a suburban household and taken on traditional husband/wife domestic roles. Their marriage changed Hemorrhage into a couch potato, who put off his job and spent every day doing nothing but abusing the ultimate power source by watching TV, while Summer did all the work. After plenty of arguing, Summer learned from experience why her mom divorced her dad and left him. Before they left him forever, Rick swiped the ultimate power source, which was a striking tragedy to Hemorrhage.

Hemorrhage is a large, powerful, muscular man, who wears a rusty bucket-shaped helmet over his head, with a thin, arching crevice for vision. White paint, depicting what looks similar to a squid, covers the front of his face, along with a few, brown rust stains in other places on his helmet. He has yellow veins on his right shoulder and green spray paint on his left. His right arm is dark gray and made of steel. However he still has his actual left arm as shown after he married Summer, revealing that the dark steel arm is actually a glove.

Under his helmet, he has short, pale, blond hair and a mustache with a style similar to DB Cooper. His skin is significantly more pale and white on his face and neck, due to him wearing his helmet for the majority of his time while out in the sun. It gets so hot inside his helmet that he had to shave off a beard that formerly went with his DB Cooper mustache.

Summer, when confronted with his appearance (at her insistence) responds with some undisguisable surprise: "Oh.", Etc. Notably she asks: "Do you guys have the phrase 'Hat on a hat'?". The reason for her offput reaction is never explained.

Under the helmet, Hemorrhage has a tough personality, strong leadership skills, and a loud voice. However, without his helmet, Hemorrhage appears to be a soft person who is self-conscious of his image and acts similar to Jerry. Following his marriage to Summer, Hemorrhage became a stereotypical, lazy, television-watching, couch potato of a husband that had his wife do all the work, ultimately causing their marriage to fail. 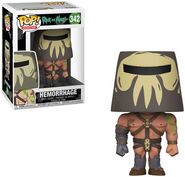 Funko Pop! 342 Hemorrhage
Add a photo to this gallery

Retrieved from "https://rickandmorty.fandom.com/wiki/Hemorrhage?oldid=70232"
Community content is available under CC-BY-SA unless otherwise noted.