Rick and Morty Wiki
Register
Don't have an account?
Sign In
Advertisement
in: Article stubs, Characters, Male Characters,
and 4 more

Something Ricked This Way Comes

“Pluto's a fucking planet, BITCH!”
—King Flippy Nips on Jerry's opinion about Pluto not being a dwarf planet[src]

King Flippy Nips is the ruler of Pluto. He first appeared in 'Something Ricked This Way Comes' as the central antagonist.

He looks just like any other Plutonian, yet with minor alterations. He wears a golden crown and a cape. He also has no aerials on his head; this is possibly the reason he is king. He is male.

He acts quite self-centered. He is also selfish because he knows everything his son says is real, but keeps quiet about it because he wants to stay king. He is also highly manipulative.

In the episode Something Ricked This Way Comes, King Flippy Nips has Jerry and Morty kidnapped to Pluto because of Jerry's dedication to Pluto being a planet. He then puts Jerry in front of crowds and on TV to continue to say that Pluto is a planet, while claiming that Jerry is a real scientist. He awards Jerry with the Plutobel Prize (the highest honor reward for scientists) while keep urging Jerry to talk of how much of a planet Pluto is.

When the plutonian police captures Scroopy Noopers, King Flippy sends him to Plutanomo Bay military prison for continuing to say that Pluto is not a planet. Afterwards, while talking to Jerry about Scroopy, he let's it slip that Pluto is a celestial dwarf before correcting himself and sending Jerry off to his Plutobel Prize ceremony. When Jerry refuses to cooperate about Pluto's planet-status King Flippy rudely sends Jerry back to Earth. 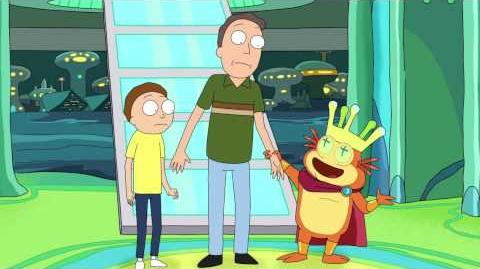 Rick and Morty The Complete First Season - Clip Pluto's a Planet - Own it on 10 7
Community content is available under CC-BY-SA unless otherwise noted.
Advertisement