Rick and Morty Wiki
Register
Don't have an account?
Sign In
Advertisement
in: Characters, Male Characters, Deceased Characters,
and 4 more

Krombopulos Michael was a Gromflomite assassin that purchased weapons from Rick Sanchez, he was also the husband of Amy. Rick refers to him as his best customer.[1] His final purchase was an anti-matter handgun, to be used to kill Fart, a gaseous target that couldn't be destroyed with normal weapons. When he meets Rick at a garage to purchase the gun, Krombopulos introduces himself to Morty, giving him a business card.

After breaking into the facility used to hold his target, he was crushed to death by Morty after falling asleep while piloting his grandfather's spaceship. That said, there are infinite universes in the show's canon, so he is alive in at least one other universe/dimension.

Prior to his death, Krombopulos customarily handed out business cards that indicated his occupation, location, Twitter and Facebook accounts, and the hashtag #KMichaelKills. 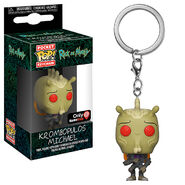 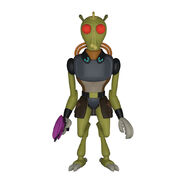