Rick and Morty Wiki
Register
Don't have an account?
Sign In
Advertisement
in: Characters, Male Characters, LGBT Characters,
and 4 more

King of the Ocean

Dan Harmon
Mr. Nimbus is a (Ice cold dick killer) is a character from the Season 5 episode Mort Dinner Rick Andre. He appears to be capable of standing toe-to-toe with the mad scientist Rick Sanchez, even referred to as "my nemesis" by Rick. He is also the king of the ocean and Atlantis.

While Rick is unconscious, Morty manages to narrowly land the Space Cruiser on Earth from another adventure, although he does so in the ocean. As Rick reawakens, this landing in the water prompts him to panic, followed quickly by the arrival of Mr. Nimbus, who claims Rick has "desecrated the sacred treaty betwixt land and sea." When arriving to the Smith House, he controls the police to fight, seduce each other and leave. He also gets the attention of Jerry and Beth. Later in the episode, begins the treaty between him and Rick it doesn't go so well resulting in Nimbus in threatening to drown the surface world, but Rick doesn't care, Rick gets more angry at his appearance and existence, but Nimbus believes it to be a cover story as he seems to be angry that he is the only one who truly see Rick for what he really is. But the talk is cut short when Rick is forced to leave, in order to save Morty and Jessica from a futuristic Narnia like world.

After saving Rick from the futuristic world, they begin to make up, with Nimbus mentioning that a new friendship is in order. Rick seems to agree with this sentiment as well, and they proceed to momentarily reconcile. However, this is changed when Summer enters the garage with a conch shell, the source of Nimbus' power. Rick makes an attempt to reason with him but to no avail. Nimbus begins to punch and kick Rick to the ground, causing serious injury to him. Then, against Morty and Rick's calls to destroy it, Summer blows on the shell, causing Nimbus to become stronger. He then drags Rick out into the driveway, where (under Nimbus' control), Rick is arrested. Much later in the end credits, Beth and Jerry arrive to his apartment, at first they only want the reward but then are left speechless when Nimbus opens his door, they plead not to tell Rick about what's going to happen next and are worried he wouldn't understand, to which Nimbus says: "Yes he would", as his robe drops down and he seduces Jerry and Beth.

Mr. Nimbus is a fish-like anthromorph with black hair and green eyes, who wields trident, is clad in a speedo, and wears a cape. He has frills sticking out from the sides of his jawline. He appears to use creatures of the sea for transportation, such as dolphins, octopi, and giant clams.

Mr. Nimbus Rick's self-proclaimed nemesis; having a significant history with the latter to which he was regarded as a cold-blooded killer with the ability to control the police to his whim. His presence is enough to cause distress in Rick that he might appear, and to refer to Rick by his full first name. It's implied that he and Rick were once close friends and embarked on adventures across the cosmos together. However it's clear over time their friendship fell apart over petty disagreements and the two became enemies. They eventually established a treaty to not attack each other, which was accidentally broken by Summer. 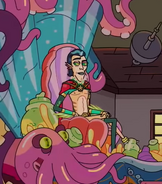