Planetina is an elemental-themed superheroine determined to protect the Earth. She was created by the Tina-Teers using the four elemental rings (Fire, Water, Dirt, and Air).

Planetina catches Morty's attention when she stops an evil rat alien named Diesel Weasel. Morty promptly asks her on a date, to which she accepts. After a fire, Morty confesses how he likes her and she is flattered before introducing him to her "children", who treat her like an item. She soon has an interview with the media until becoming surprised when Morty states they are a couple.

Planetina and Morty officially become a couple after a series of dates. However, the Tina-Teers are annoyed by the relationship and want to get rid of Morty for Planetina to focus on making them profits. This causes Morty to go on a murder spree of the Tina-Teers and their potential customers until he obtains their rings. Now free, she and Morty want to be together but his mother forbids it, causing Morty to leave home.

While trying to save the Earth with Morty, without the Tina-Teers to reign her in, Planetina's behavior starts to become increasingly violent starting with slashing the tires on a highway full of cars and then, burning down a congressman's home with a petrol bomb which begins to horrify Morty. Afterwards, at a mining facility, the two confront a group of miners who are about to go underground while Planetina is telling them what their actions are doing to the planet, but they refuse to listen and proceed underground to resume their mining. Although Morty says they'll get them next time, Planetina flies into a fit of rage and burns the entire mining facility to the ground resulting in the deaths of 300 people while Morty watches in tears. These actions cause Morty to decide to tearfully end their relationship amid Planetina's attempts to justify her actions at the mine from his bedroom window. She also brings up how he killed the Tina-teers, while he states he only wanted her free. Planetina then confesses her love for him but he sadly rejects her declaration. Distraught at the rejection, she tearfully curses Morty out before flying away into the night heartbroken, leaving Beth to comfort her heartbroken son. 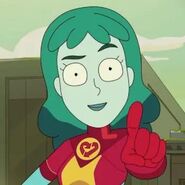 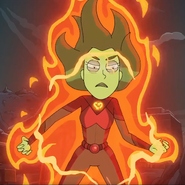