“You know the worst part about inventing teleportation? Suddenly, you're able to travel the whole galaxy, and the first thing you learn is, you're the last guy to invent teleportation”
—The Rickshank Rickdemption

The Portal Gun is a gadget that allows the user(s) to travel between different universes/dimensions/realities. The device was likely created by a Rick, although it is unknown which one. Rickmurai Jack confirms that Rick C-137 was not the original inventor of the portal gun in the Multiverse. Due to the fact that he was the earliest known Rick to possess the Portal Gun and his enticing of Rick C-137 to possess it (in the fabricated memory), it is highly likely the original inventor of the portal gun was Weird Rick.

The earliest observed instance of the gun is during a memory (depicting Rick in his home dimension tinkering with the concept of teleportation) extracted by Federation Agent Cornvelious Daniel while Rick was willfully imprisoned. It shows a bulky handheld prototype device seemingly edging on the capabilities of practical interspatial teleportation, though Rick C-137 is shown clearly having difficulty getting it fully operational. After failing to work out errors inherent to his invention, an interdimensional version of himself traveled into his garage hoping to implore him to shift his focus into traveling between realities instead, even alluding to a thinly veiled reference of the Central Finite Curve's existence in the process.

After his counterpart explains what awaits the titular protagonist if he accepts the offer, Rick C-137 decided to reject the knowledge of any further secrets on the basis it all sounded lonely and later claimed to be completely giving up on science as an occupation to his wife Diane. However, shortly after standing his ground against the Weird Rick, the alternate version swiftly left the dimension for good, and likely sent back a bomb in his place as a final gesture of his disapproval. These events led to the untimely death of his wife and child which ultimately sent him down a path of vengeance to find the party responsible. After grieving from the trauma, the Rick we've followed throughout the series pulled himself together and jury-rigged a much smaller prototype variant, now seemingly capable of interdimensional travel and used it to travel to the Phone Universe on his search, among countless others on the Curve. After relying on this newly constructed and unique version of the portal gun for several years, gradual improvements were made which eventually culminated in the result of the modern iteration typically shown in Rick and Morty's adventures.

During the present-day events shown in the series, the modern version was destroyed by a Gazorpazorp in Raising Gazorpazorp and as result, Summer and Rick had to return to Earth via space craft. Rick acquired a replacement gun, but that one was also destroyed when Rick rigged it to explode during the battle between Federation agents and the wedding guests at Birdperson's wedding reception in The Wedding Squanchers. Another portal gun was found by Summer in The Rickshank Rickdemption when she unearthed the corpse of the Rick that was killed in the Replacement dimension but that gun was later destroyed by the Jerry Smith that lived in the Cronenberged dimension. Given the fact that Tammy Guterman demanded that the portal gun was not to be damaged when demanding that Rick dropped it, combined with the fact that the Galactic Federation used a brainalyzer on Rick to get the details on how to build their own strongly implies that the Federation wanted to use his portal formula for their own personal use and that the reasons for it were likely to exert their control onto other dimensions.

Although the primary function of a portal gun is for traveling. It has and can also be used offensively or defensively, usually by transporting a hazard to the location. It can also be used to create obstacles, or quickly run away. A portal does not need to be on a solid surface, so if a portal opens inside of a person or object, it will cut said object (as seen in Mortynight Run when Rick rends a Gromflomite). Speed does not seem to be conserved through portals, so they can be used to break falls as well.

It is a metal grey gun-like controller with a black dial which is used to select a destination as shown on a red-green LED display. In earlier episodes there is also a red display on the bottom of the parallelepiped muzzle which has an unknown function. It is also unknown whether or not the dial also functions as a button. A small hatch on the handle opens up to reveal the self-destruct button. When shot, it generates an opaque green portal, acting like jelly when touched.

In The Rickshank Rickdemption, the Rick that appears to C-137 in his fabricated origin story carries a portal gun of a different design, possibly an earlier prototype. This prototype is shown in Forgetting Sarick Mortshall, when Morty and Nick are trashing Rick's garage. According to Morty, the prototype Portal Gun is the equivalent of an iPhone 3.

The underside of the gun in Get Shwifty, where the red screen is mysteriously not present.

It is assumed that the Portal Gun can be used to portal to another location in the same universe, however, based on the gun's design (the inclusion of only a simple dial to input destination) and the coloration of its portals, an argument could be made that the Portal Gun can only be used to transport a traveler to a location that is, in some sense, the same location in a different universe. However, that would imply that anyone or anywhere that Rick visits via portal technology exists in a different universe. Consequently, this would also mean that any Rick exiting a portal within the same universe would also be an alternate version of himself, instead of the original subject who entered.

It's unclear how exactly the Portal Gun is controlled. Rick at multiple times can be seen instantly reconfiguring it as he sees fit, without any visible action or effort, so it might be controlled telepathically; however, Morty has to manually adjust its controls on the handle to tune it to select an exit destination.

The portals work in both directions until the portal collapses, which takes varying amount of time (presumably regulated by user). Portals can be created under any angle, not just vertically, across a solid surface or in thin air. Portals are opaque, and the user cannot see the other side until they actually enter, as seen with the Blender Dimension portal.

Larger devices of similar design are used on the Citadel, either as portals to transport large objects (like trash), or to teleport the entire Citadel if needed without creating an actual portal. Gaseous compounds cannot enter through the portals as stated by Rick, which prevented them from escaping with Fart.

Properties of the liquid:

If combined with lime soda becomes a volatile and toxic substance that create the portal on whatever that touches.

When a smaller portal enters a larger portal the object will violently implode which happened to Nick.

Can dissolve things if in large enough quantities.

Can also be used to teleport without portals instantly but appears to have to use a specialized reactor to do that.

Can create much weaker version of black hole in enormous quantities.

Can cut things if that is an a free flowing state. 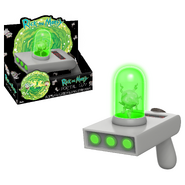 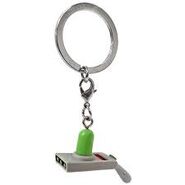 A dysfunctional early iteration of the portal gun. 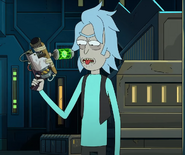