Pussifer is one of Rick's enemies during his Rick and Two Crows phases in Rickmurai Jack. He appears in the anime opening as one of the villains.

Rick stabs him shortly after his introduction in the episode. 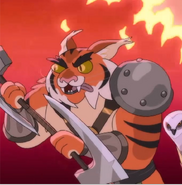 Pussifer fighting Rick in the tavern