Rick and Morty Wiki
Register
Don't have an account?
Sign In
Advertisement
in: Characters, Male Characters, Antagonists,
and 5 more
English

“Calling me Gearhead is like calling a Chinese person Asia face!”
—Gearhead

Revolio Clockberg, Jr., more commonly referred to as Gearhead, is a recurring character who first appeared in the episode "Ricksy Business". His character is a representative of "social gearheads", people who know a lot of technical information about gears. In Gearhead's case, it's information about the Gear Wars and engineering. He is a guest at Rick and Summer's party and can play an instrument similar to a lute.

Gearhead is first seen explaining the Gear Wars to Rick, as Morty anxiously paces the house. To escape talking to Gearhead, Rick calls Morty over and uses him as a distraction. Gearhead then begins to tell Morty about the Gear Wars. Later in the episode, he is seen playing a musical instrument to an admiring crowd, one of the onlookers being Jessica.

He makes his second appearance in "Mortynight Run", where he helped fix Rick's Shipsaucer. But when he found out that the "Fart" he was holding hostage was worth millions, Gearhead betrayed Rick and Morty, and threatened to kill him. He reveals that he never liked Rick, and that "Gearhead" is a racial epithet. Rick kicks him in his "gearsticles", and takes them out, switching them with the gears in his mouth.

He appeared again at the end of "Vindicators 3: The Return of Worldender", as a guest at Rick's party for Noob-Noob. Rick apparently ended his feud with Gearhead after getting high with him. In the post-credits scene for the episode, Gearhead uses Morty's Vindicators jacket to pick up college girls. When an actual monster appears, he ditches the jacket, and flees. While trying to escape he trips and is dismembered after hitting the ground.

Gearhead is a gear-person with a thick transparent pink build, and shoulders. He is bald, with a purple unibrow. He has orange and yellow gears that make up his organs, ears, and mouth. Although his gearsticles are a light shade of blue, and may or may not currently reside in his mouth. He also wears a blue collar, boots and gloves. 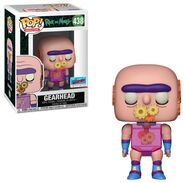