View source
watch 01:23
Wiki Targeted (Entertainment)
Do you like this video?
Play Sound

Member of the Council of Ricks

Rick Prime was one of the members of the now defunct Council of Ricks. He was killed by Rick C-137 in "The Rickshank Rickdemption."

Rick Prime's appearance is almost identical to the other members of the Council of Ricks. The only difference is that his hair style consists of a large puff of hair on top, with the sides and back of his head shaved. He also has a tiny soul patch on his chin.

Schmeckles, Blips and Chitz Coupon, Council Badge
Rick Prime is the first Rick in the Council of Ricks the player must battle to get back the portal gun. You're required to have two gym badges to battle him. 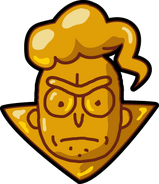 Italiano
Community content is available under CC-BY-SA unless otherwise noted.