Morty is sick and tired of Rick always being a big selfish jerk, so he convinces Rick to go harvest some "space medicine" on an alien planet. They even bring Summer, even though she won't stop crying about having her heart broken or whatever. But while on the planet, they get interrupted by robobros and some heavy-cologne-wearing dude named Peacock Jones, so Morty might have to resort to some truly unspeakable tactics in order to get the medicine and get home safely.

Having just come back from an adventure with Rick, Morty exclaims that he's had enough. As they've apparently just gone through the birthing canal of a 500 foot lizard to get karvesshian ovary crystals, which are apparently very valuable on black market.

Morty tells Rick he wishes Rick would think of someone else for once, which Rick disagrees with from a fundamental point of view; that altruism is self-defeating, and the only way for everyone to be happy is to make yourselves happy first. Morty argues that that's only how selfish people talk, and that Rick needs to be a better role model for him, because between male figures in his life it is a choice between Rick and his father. At this point, Jerry comes in asking around if anyone's seen his Titanic Trading Card set, but in the face of their silence he quietly leaves once again.

Pointedly, Rick is convinced, and says they'll make some space medicine. Suddenly they hear a sob from the cornor of the garage and see Summer crying over her phone. It turns out Ethan broke up with her for someone else. Rick seems content with ignoring her and is ready to leave, but Morty guiltily suggests they take her along with them. Rick is skeptical, but Summer insists she wants to come. "I don't want to be on any planet where someone chooses Brittany Madison over me."

Flarbellon-7 is a completely deserted planet Rick goes to for some peace and quiet, and to stash his things. He instructs Morty to grab a shovel and then to knock out cloud seals, known as penps, down to the ground. The fluid in their stomachs can apparently cure just about anything.

While Morty works on knocking down seals, Summer questions Rick again on how empty the place is. Rick re-confirms his earlier claim, but Summer points out some people nearby.

Peacock Jones introduces himself, a self described "galactic ladies man." He says he and his companions travel the cosmos looking for adventure. His current companion, Barbarica is looking to spend some pent up violence, which is the norm for her people. When Summer questions the size of Peacock's ship, he assures her it's more than comfortable enough for two to see the universe. Then flirtatiously adds that it would be doubtful he'd see anything as awe inspiringly beautiful as Summer.

Rick tells Morty to hurry up, and Peacock quietly tells Rick that they ought to leave because he'd arranged for some action to satiate Barbarica's violence, which would arouse her. When robobros start transporting to their location.

Barbarica enthusiastically throws herself into a battle with them. But, Morty who has finally managed to hit a sky seal has knocked it right on top of Barbarica, killing her. Peacock briefly and frustratedly mourns the loss of another companion. Rick, irritated, states that the only way to beat the  numerous robobros is to wait 20 years for them to put on weight and realize they'd wasted their lives.

Just as one robobro is about to attack, Morty beheads it with a swing of his shovel. Rick quickly takes the head and sets it to destroy itself, stating that destroying one robobro will destroy all the others. However, he quickly realizes his miscalculation when the robots initiate a self-destruct sequence.

Peacock takes that as his cue to leave, but before doing so invites Summer to join him. Rick tries to tell her not to go with him, but Summer tells Rick she wants to go on adventures and feel special too. Rick quietly acknowledges her and lets her go.

Morty calls for Rick's attention again so they can leave. However, Rick insists that they not leave without the penp juice, and hands Morty a device to put up his butt in order to get it.

As the planet explodes in the distance, Morty wonders if Summer will be ok. Rick reassures him that, unlike Morty, Summer's tough. Morty is giddy and impressed that Rick proved himself because he risked his life for the medicine. But, it turns out that the penp juice is not only a miraculous cure, but also an incredibly potent psychotic. Basically, he's "going to help them get wrickity wrickity wrecked, dawg!"

In Don't Look a Gift-Horse in the Rick, Rick takes Beth to an alien planet for a picnic to have some father-daughter time together. The two are interrupted by the arrival of a group of horse-like aliens. They were hunting Rick Sanchez in order to retrieve an amulet that Rick had taken from them. But Rick tells them he'd sold it years ago in exchange for money he'd spent on hookers.

Rick gets the jump on one of the aliens and grabs its laser gun, then he and Beth run for cover. As he continues to shoot, Beth demands Rick do something. Rick points out that he is, and then tosses Beth a handheld laser pistol and tells her help as well.

Beth takes aim with the gun, but as she does so, flashes back to the horses she normally dedicates her life to saving, and hesitates. Beth tries to explain to Rick, but he rebuts that it's either that or getting blown up, and orders Beth to kill them.

Beth tearfully apologizes as she shoots. Only to find herself in the operating room crying apologies as the horse she was performing surgery on flatlines. 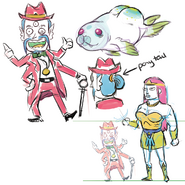 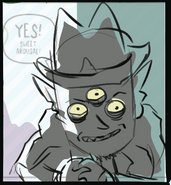 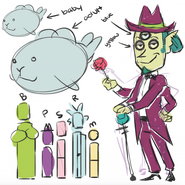 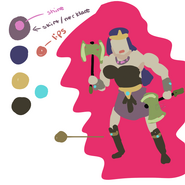 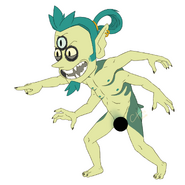