Jerry is real tired of being treated like he’s worthless, ya know? He works really hard for this family! He deserves a break! So he goes to see his best bud Doofus Rick for some fondue and merry-go-round times. However, their perfect day is interrupted by… Doofus Jerry?! And this guy seems like real bad news, man…

Morty Smith enters the house with a black eye, gained after he walked into a door from watching Jessica bend over. When Jerry tries to claim that "the apple doesn't fall far from the free", everyone doubts that Jerry has ever been in a fight. Embarrassed, Jerry storms off before he notices the portal gun.

As the two enjoy the park, the security service notices Jerry and Rick, alerting their boss, ordering that both be brought to him. When the two arrive, the boss reveals himself to be Doofus Jerry.

Shocked that he has a counterpart on this Earth, Jerry accidentally reveals the existence of the multiverse. Intrigued, Doofus Jerry reveals that he is the most successful man on Earth, the literal dictionary definition of it, and offers to swap places with Jerry. Though tempted, Jerry ultimately denies only to be knocked out. Held at gunpoint, Doofus Rick is forced to surrender the portal gun.

Emerging in Dimension C-131, Doofus Jerry is instantly smitten by Beth, his charm quickly winning her over, even developing an attraction to Summer. As he salivates over his next conquests, he is confronted by Morty who instantly sees through the imposter. After trying to have Doofus Jerry leave peacefully, only to be threatened with death, Morty goes to Rick.

Confronting Doofus Jerry on the patio, Rick tries diplomacy only to be scoffed at, calling Rick an old drunk. Though furious, Rick is eager to fight a Jerry only to be beaten down before he can even get a shot in.

There's a new status quo now. One where Jerry wins over Rick.

An alien appears in the living room, looking for Rick only to be told that he's out. Instead, Beth and Summer try to help the aliens with their problem: a sun is going to impact their home planet. Trying to think like Rick, Beth gets drunk and manages to redirect the star away from the planet and towards the viewing platform. As Summer drags Beth back through, her drink spills on the portal controls, frying them and dooming the aliens to a fiery death. 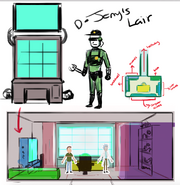