Human (Simulated; Part of a game)

“I had a nightmare.. I was with an old man, he.. put a helmet on me.”
—Morty unknowing that Roy is just a game[src]

Roy Parsons is the eponymous character of the virtual reality arcade game "Roy: A Life Well Lived" which is played by both Morty and Rick at the intergalactic arcade Blips and Chitz in the episode "Mortynight Run".

Roy's personality depends on whoever is playing the game. Regardless, most people forget about their real life and believe themselves to be Roy as long as Roy remains alive. Some people, such as Rick Sanchez, are able to remain conscious both inside and outside the game at the same time, effectively giving Roy their own personalities. This is most likely due to Rick's status as a megagenius, implying highly intelligent individuals are able to remember their real life as they play. 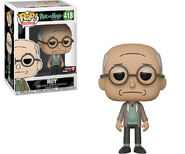