Mortynight Run
Roy: A Life Well Lived is a Virtual Reality Life Simulator, a game seen at the Blips and Chitz arcade and is played by Rick and Morty in the episode "Mortynight Run".

Players assume the role of Roy Parsons, and the goal of the game is to guide Roy through life, from childhood to death, overcoming obstacles along the way. The game's programming will adjust Roy's life path and the events that happen to him according to the decisions the player makes.

There is no point system in the game as the final score for the player is how many years Roy lived. To the unprepared players though, the game can be disorientating, as the memories players gain from the game will conflict with the ones from real life.

There was a sequel made to the game called Roy 2: Dave, as well as a bootleg version called Troy: A Life Lived.

There was another sequel, called Roy 3: Woman Talking About Video Games on the Internet. It was mentioned to be survival horror. 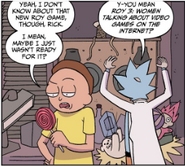