Rick and Morty Wiki
Register
Don't have an account?
Sign In
Advertisement
in: Antagonists, Characters, Male Characters,
and 2 more

Scary Terry is a character that appeared as the secondary antagonist in the episode "Lawnmower Dog" and the comic story Morty and Rick in: Mortballs. After a failed attempt at killing them, Scary Terry retreats and heads home. While he is asleep, Rick and Morty incept his dreams and befriend him, he is also the husband of Melissa, and the father of Scary Brandon.

At first he first appears to be a bloodthirsty nightmare, but he is really just misunderstood. Scary Terry was very self-conscious about how scary he was and feared that he may not be terrifying enough to scare people, so he put a lot of pressure on himself because of that. This made him very tense and touchy, until Rick and Morty entered his dreams and made him feel better.

He wears a blue and green-striped sweater, grey slacks, fedora, and gloves with small swords on the fingers. He has sharp teeth, deformed purple skin, cat-like eyes with yellow sclera and a monobrow. He has a second set of balls that hang from his chin. He is known for saying "bitch" at the end of almost every sentence. After Scary Terry spots Rick Sanchez and Morty Smith, Rick aptly describes him as a "legally-safe knockoff of an '80s horror character with miniature swords for fingers instead of knives".

“Welcome to your nightmare, BITCH!”
—to Rick and Morty

“You can run, but you can't hide, BITCH!”
—to Rick and Morty

Terry with Rick and Morty 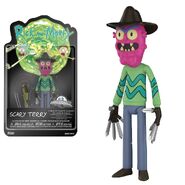 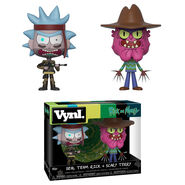