For other versions of Summer Smith, see Summer (disambiguation).

Spencer Grammer
Summer Smith (C-137) is the alternate version of the original Summer, she is the daughter of Jerry Smith and Beth Smith, the older sister of Morty Smith, the granddaughter of Leonard Smith, Joyce Smith, Rick Sanchez and Mrs. Sanchez, the great-granddaughter of Rick's Father and a unnamed woman, and the great-niece of the Unnamed Uncle, Summer attended at the Harry Herpson High School along with her younger brother Morty. She is a teenage girl who finds her family life to be dysfunctional. Summer currently resides in the post-apocalyptic remains of her dimension, along with her father Jerry, and her mother Beth. Also, she became a feral survivor alongside her parents and held a disdain for her grandfather Rick.

Summer is a teenage girl of average height and a thin build. She has a light skin-tone, and shoulder-length light brown hair. Her facial features take after Jerry's, having an oval head and pointed nose.

Her most common outfit has been a magenta tank-top, white capri-pants, and black slip-ons. She usually has her hair pulled back in a high ponytail.

In the "The Rickshank Rickdemption", she is shown to have slightly bulked up, and her hair has been let down. Her magenta tank-top has been replaced by a blue one.

Summer shares some personality traits of a typical American teenager. She wishes to be popular among her peers, and finds the antics of her family to be dysfunctional; she genuinely cares about them, however. She's very attached to her phone and social media, taking videos of her dog Snuffles when he became super-smart, and shuddering at the thought of her father Jerry joining Facebook.

Although Summer is not as scientifically gifted as her grandfather Rick, she does possess an above-average intelligence. Summer is shown to be a whip-smart and nimble-witted girl, at least compared to rest of her family.

After getting used to living in a post-apocalyptic world, she became a brave, cruel, sadistic and wild girl.

In the episode, "The Rickshank Rickdemption", it is shown that Summer and her parents have adapted to the post-apocalyptic world of the Dimension C-137, they survive off of roasted cronenberg, and use their skin as clothing.

It was not known what happened to Summer and her parents after being frozen until Rick and Morty Issue 45.

Summer and Jerry are out hunting for dinner. When Summer spots her Cronenberg brother it give her doubts that her brother has actually left. When she consults Jerry about seeing Morty, her Father tells her to forget about Rick and Morty. However Summer travels into the city to look for her younger sibling (which she had been told not to do) and to her surprise finds Morty, But not Morty C-137. Cronenberg Morty tells Summer about how Cronenberg Rick, along with other Rick, is attempting to release the the most evil Rick of all, Old God Rick.

Summer takes Rick's ship and uses the Neutrino bomb in the ship to blow up the evil Ricks and save her parents, so they can live out their lives

Summer seems jealous of the fact that her grandfather Rick chooses to go on adventures with her brother Morty and not her.

In "The Rickshank Rickdemption", it turns out that over time, Summer started to despise her grandfather, probably due to his involvement in accidentally "cronenberging" the world.

At first, the siblings Smith barely interact with each other, as Morty would generally be with Rick on an adventure. Summer seems to be a little jealous of her brother Morty, as he is always going on adventures with Rick, but she mostly expresses her jealousy to Rick, and not Morty.

It has, however, been shown that she does care for her little brother as seen in Lawnmower Dog, she hugged him after seeing him alive and well after she was freed, but Morty pushed her since her breasts were in his face (he had terrible experience while in Mr. Goldenfold's dreams, which involved seeing her half naked).

In "The Rickshank Rickdemption", she and her parents try to make sure Morty remains with them, meaning they may have missed him in his absence.

Summer seems to have a fairly good relationship with her mother Beth, the girl and the woman are very similar as they are both very smart, humorous, and ambitious. However, Summer is much more selfless. Their relationship clearly has its flaws. She also appears to be rather envious of Beth's boobs, as Morty discovered a bra way too big, which Summer defended herself, claiming to grow into as Beth had big breasts.

Summer and became much more attached to her parents, having become accustomed to living in a post-apocalyptic world.

Summer seems to have a fairly good relationship with her father Jerry, Summer resents the fact that her father takes away her phone in "Anatomy Park" but prefers having no phone over having her father Jerry join Facebook.

Summer and became much more attached to her parents, having become accustomed to living in a post-apocalyptic world.

Tammy and Summer were both the best of friends. The two of them were just casual friends who talked to each other and hung out a lot and there was nothing all that complicated to their relationship. However, she, along with most of the planet's population, became a Cronenberg.

Nancy is one of Summer's unpopular friends, that she does not treat with the same respect she gives to her other friends. Summer usually neglects and ignores Nancy and never actually does the same things with her that she used to. She' along with most of the population, was turned into a Cronenberg.

Summer was in love with Frank Palicky, when she saw Frank standing there frozen in the hallway, and oblivious to how he was frozen, she was shocked, thinking that he was looking at her. She walked up to him, wanting to plan her first interaction with her just right, because she was dreaming of one day, going as far as to marry him and that the story of their first time meeting would be the story that they'd be telling to their children. She talked to him, lovingly saying "Hey, Frank.", just as his frozen body tipped over and smashed into a bunch of pieces on the ground, sending her into an extreme state of shock and fear. She was later seen, crying over his obituary, asking "What kind of a god would do this?" and then later, coming home and still crying about his death. Two episodes later, in the episode Anatomy Park, she was shown to have been dating another boy for weeks, meaning that her care for him is over.

In the episode Anatomy Park, Summer was shown to have been dating Ethan for a long time, and not telling her parents about it. Ethan came to her house and was angry at her for always ignoring him and Summer was angry at him for only caring about himself. Jacob had to sort the argument out between the two of them, digging into his feelings and they became a happy couple again. He presumably became a Cronenberg in Dimension C-137.

Summer does not know where her grandfather Rick is

Summer while playing the movie "Jaws" to entertain her parents 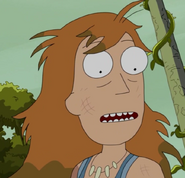 Funko Pop! 303 Summer
Add a photo to this gallery

Retrieved from "https://rickandmorty.fandom.com/wiki/Summer_Smith_(C-137)?oldid=60678"
Community content is available under CC-BY-SA unless otherwise noted.