View source
watch 01:40
Boba Fett Returns - The Loop
Do you like this video?
Play Sound

This article is about Teacher Rick. You may be looking for other versions of Rick.

Justin Roiland
Teacher Rick is an alternate version of Rick Sanchez who first appeared in the episode, "The Ricklantis Mixup". He is a teacher at Morty Academy, where Rickless Mortys are being trained for a new Rick.

Teacher Rick shares the general appearance of Rick Sanchez, though he has long hair, a blue bowtie, brown shirt, white undershirt, grey pants, and a black robe with gold edging.

He teaches at the Morty Academy which was created for Morty's to be the best sidekicks and always be positive towards Ricks, it seems as if Morty's are trained with only one point of view allowed and they have to be on that view or else they will fail the class/not graduate from the Morty Academy. He has students called Left-Handed Morty, Lizard Morty, Slick Morty, and Glasses Morty. He has one Rick called Slow Rick, which he refers to as "Tall Morty".

At the end of The Ricklantis Mixup when Evil Morty takes over Teacher Rick tells the Morty's there will be no new Ricks and that the school's curriculum is changing. He does not know the details of such a change as he has been fired.

Whether he left the Citadel after losing his position is unknown, if he stayed he likely died when the Citadel was destroyed by Evil Morty. 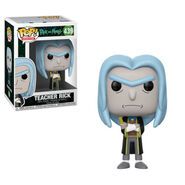