Rick and Morty Wiki
Register
Don't have an account?
Sign In
Advertisement
in: Article stubs, TV and film
English

The Flesh Curtains was a band formed by Rick Sanchez, Birdperson, and Squanchy shortly after they met at Birding manapalooza flargabarg. They performed their first concert at the music festival and kept performing for a number of years. Presumably, the band dissolved prior to the events of the series.

Rick Sanchez first met Birdperson during an alien music festival, cultivating a friendship shortly afterwards. The new group of friends are said to have been so high on Senthol Diempathate that they decided to form their own band. They brought along Birdperson's friend, Squanchy, and performed an impromptu concert at the festival. They would go on to perform at other venues as well in their older years, one of which was photographed; the photo was later seen hanging up on Birdperson's wall. 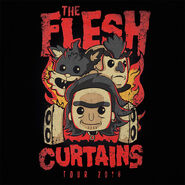 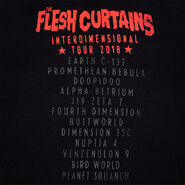