The Real Animated Adventures of Doc and Mharti

"The Real Animated Adventures of Doc and Mharti"

Channel 101
The Real Animated Adventures of Doc and Mharti is the short that inspired Rick and Morty. It was created by Justin Roiland and produced by Comic Sacrifice.

Roiland was getting cease and desist letters from Bill Cosby's lawyers for his House of Cosbys series. As a humorous protest, he created a vulgar Back to the Future parody that featured Doc Brown forcing Marty to give him fellatio. As he was editing the audio, Roiland became enamored with his impressions of the two characters and decided to drop the protest aspect. The characters were renamed Doc Smith and Mharti McDonhalds to avoid a lawsuit. Three other shorts were later created, the first to promote the comic Scud: The Disposable Assassin, the second to promote the creative freedom of Channel 101, and the last as a Gatorade commercial.

The short begins with Mharti McDonhalds upset due to his kite getting stuck in a tree. Mharti's friend Doc Smith arrives and decides to take Mharti back in time to before the kite got stuck, much to Mharti's happiness.

Later, Mharti is ready to go back in time, but Doc's 'time travel car' (as Doc calls it) won't start, and the only way to get it working is for Mharti to lick Doc's dry testicles (according to Doc, the saliva has to be warm and fresh). Mharti is very confused and tries to protest, but Doc insists. Eventually, Mharti is convinced and starts to lick Doc's balls (which is shown in graphic detail). Doc is very happy, and tells Mharti that his efforts are (somehow) working.

One hour later, Doc and Mharti have gone back in time to the day the tree was planted in 1955. Doc tells Mharti that the only way to stop the tree being planted is for Mharti to once again lick his balls promising that something magical and scientific will happen when the man who plants the tree seeds sees him performing oral sex. Mharti doesn't understand since licking Doc's testicles was supposed to fix the time travel car, but does it anyway. The man with the tree seeds sees them, runs away in panic and somehow disappears. Doc tells Mharti they can now go and fly the kite.

Returning to the present, Mharti is enjoying his kite but cannot help but wonder about the man in 1955 they killed. Suddenly Mharti starts to disappear, and Doc guesses that the 1955 man was Mharti's ancestor. Desperate to keep existing, Mharti suggests that he suck on Doc's testicles. Doc agrees, but tells Mharti to jerk him off while he does it. Once again, this mysteriously works, and Mharti is overjoyed and thanks Doc for saving him. Doc insists that Mharti saved himself.

Next time on: The Real Animated Adventures of Doc and Mharti

Mharti is distraught and tells Doc that he wasted so much time flying kites that summer he forgot about a big test that is the very next day. Doc tells Mharti to start licking his balls.

Connection to Rick and Morty

The skit's main link to the show was that this was where Justin Roiland developed the characters who would become Rick Sanchez and Morty Smith seven years later. Rick's distinctive burp can be heard during one line, which Roiland later explained began as an accident. The skit was initially done as a retaliation against the copyright issues concerning House of Cosbys, and the two eponymous characters were intended as parodies of Doc Brown and Marty McFly from the Back to the Future series. The skit was meant to be deliberately provocative at first, but Roiland decided to shield it from possible lawsuits after he discovered the potential in the voices he did for the short.

Roiland would continue to do the voices for these characters in various projects, usually far removed from the original concept of a Back to the Future spoof. Using the voices in various projects became an in-joke among Justin and friends, and few were aware of the original skit. When he was offered the chance to make a series for Adult Swim, Roiland used the characters as an initial pitch.

The original skit was never shown to the producers of the show. In fact, Roiland feared that they might see it while season one was being worked on. Because of this, little connections remained between the skit and the series for the initial set of episodes. Plans were made for Doc and Mharti to appear as members of the Council of Ricks, but this fell through. The pair do appear in Rickstaverse, along with a pair resembling two characters from House of Cosbys.

In season 2, however, subtle references began to be slipped into the show. In "Total Rickall," flashback shows Rick enthusiastically screaming "Lick-lick-lick my balls!" as a catchphrase. In "Big Trouble In Little Sanchez," a drawing which Tiny Rick does of his adult self screaming for help resembles Doc Smith.

In "Mort Dinner Rick Andre", a scene from the short is displayed on a crystal in the cold opening. 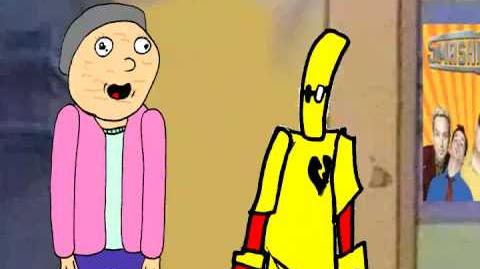 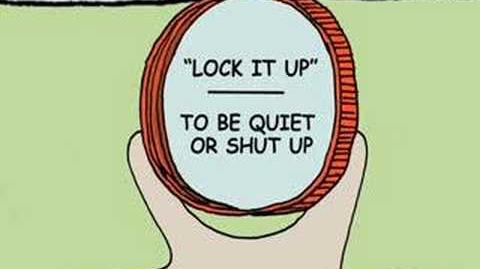