“Hi everybody. I'm Tinkles, and these are my friends!”
—-Tinkles

Tinkles is a fake character, portrayed by an Alien Parasite. Tinkles is supposed to be a magical ballerina lamb who is Summer's imaginary friend who takes her to a magical world called Never Past Bedtime Land. Summer is the only one who can see her and no one else believes that she's real. However, she appears to the Smiths after a fake memory. When the Smiths figure out the parasite's weaknesses, Tinkles was shot by Summer during an attempt to convince Summer not to shoot her.

She appeared in the episode Total Rickall.

Tinkles is a little white lamb with a rainbow unicorn horn. Her ears, hooves, tail. mouth, and hair on top of her head are light pink and her eyes are big and blue. She wears a lavender tu-tu and a tiara with a red gem in it and also some rainbow knee socks. She also sheds a bunch of white sparkles wherever she is and when she moves quickly enough, she also leaves a trail of rainbows behind. She speaks in an extremely high-pitched voice which is very bubbly and cutsy.

Tinkles is a happy and blissful creature who is always very happy about everything. She is wide-eyed and cheery and she is always up for having tons of fun. Even in the most drastic situations, such as Summer trying to kill her, she stays as positive as she can be about it, and she always tries to be happy and wonderful about it. 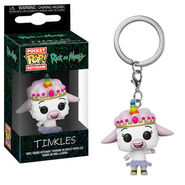 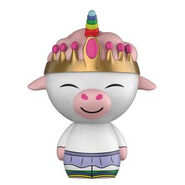