Rick and Morty Wiki
Register
Don't have an account?
Sign In
Advertisement
in: Characters, Male Characters, Love Interests,
and 2 more

Alex Hirsch
Toby Matthews is a boy at Harry Herpson High School that Summer had a crush on.

The original Toby presumably became a Cronenberg in the dimension where Morty came from.

He first appeared in the episode "Big Trouble In Little Sanchez" when he was approached by the newly-created Tiny Rick. He quickly took a liking to the new kid and greeted Summer before continuing to class. He later messaged Summer to see if she could throw a party with her parents out of town and if Tiny Rick would be there. He flirted with Summer at the house party, but when Tiny Rick revealed to everyone at prom that she arranged it so he was kicked out of school, Toby turned on her along with the rest of the students there.

When Earth was taken over by the Galactic Federation, they loved Toby so much they abducted him, catalogued the entirety of his brain and produced a short about their favorite memories from his life for KlaargWorthy.

He is briefly seen again in "Edge of Tomorty: Rick Die Rickpeat", watching Morty make screeching noises on the television with supposed friends.

Toby is a teenage Caucasian male who is very tall and has sculpted features. He has blonde, slocked back hair and a goatee. He has a red hoodie and a white shirt. He also has black pants and gray shoes.

Toby is a very laid back and cool-headed boy who enjoys partying and dating. He also seems to enjoy cars, having received a Lightning Go-Go Wheels Jeep as a child.

He saw his friend, Todd, blow his index finger and thumb off, and has walked in on his parents having sex once.

He has a relationship with Summer during the events of "Big Trouble In Little Sanchez", where he was considered the most popular boy in school. Summer had presumably broken up with her boyfriend Ethan at this point.

He had sex (for the first time) with classmate Kelsey Shawsen shortly before his abduction by the Galactic Federation - according to KlaargWorthy, Toby became unnerved at realizing she bore a close resemblance to his mother. 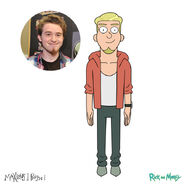