Rick and Morty Wiki
Register
Don't have an account?
Sign In
Advertisement
in: Characters, Ricks, Male Characters,
and 3 more

View source
watch 01:33
House of the Dragon Trailer - The Loop
Do you like this video?
Play Sound

“I lied, dumbass! I lie about everything! Why would I ever re-merge with a pussy like you?”
—Toxic Rick[src]

Toxic Rick (aka Gunk Rick according to the closing captions) is a one-shot antagonist in the science fiction adult animated comedy series Rick and Morty, serving as the main antagonist of Rest and Ricklaxation.

Toxic Rick was an extracted manifestation of what Rick Sanchez considered to be all his "toxic" attributes at the time of Rest and Ricklaxation, the counter part of Healthy Rick.

Toxic Rick first appears after Rick and Morty visit an intergalactic day spa. They enter a machine that "removes cognitive toxins." Toxic Rick, alongside Toxic Morty, awaken within the toxin tank of the machine, which appears to them as a toxic wasteland, almost as though the machine had blown up and destroyed the day spa, which is Toxic Rick's first guess. However, he quickly realizes that himself and Toxic Morty are the toxins which were removed. Still possessing Rick Sanchez's powerful intellect, Toxic Rick gets to work, discovering toxic elements, as well as the toxic equivalent of electricity, allowing him to send a signal out to Healthy Rick. Healthy Rick, being the more kind and considerate of the split Rick Sanchez, considers it his responsibility to free Toxic Rick and Toxic Morty from their imprisonment within the toxin tank, and re-merge himself and Healthy Morty with the two. Unbeknownst to him, however, Toxic Rick has no intention of re-merging with Healthy Rick, instead trying and failing to trap him within the toxin tank (instead trapping Stacy, who was trying to save Healthy Morty).

A battle between Toxic Rick and Healthy Rick ensues, mostly with the former on the offense and the latter on defense. The battle is interrupted by Toxic Morty, who crashes into the Smith Residence with the Space Cruiser he retrieved on Toxic Rick's orders. The duo escape to enact Toxic Rick's plans to "toxify the whole world." He utilizes the toxin tank and a moontower to shroud the Earth in a field that changes every person into their most toxic form, except for Healthy Rick and Healthy Morty, who arrive at the tower for the final confrontation. Healthy Rick finally gains the upper hand on his toxic counterpart by shooting Toxic Morty with a slow-kill device, as he knows his "irrational attachments" are something the regular Rick considered to be toxic. Ultimately, Toxic Rick allows himself to re-merge with Healthy Rick in order to save Toxic Morty's life, ending his short but significant antagonism.

Toxic Rick was the embodiment of all qualities Rick deems negative. He was aggressive, egotistical (even to the point of calling himself god), dishonest, and vengeful. He had absolutely no remorse towards attempting to trap Healthy Rick and Healthy Morty, and when that failed, changed his plans to toxifying the entire world instead.

Rick's alcoholism is also shown to be funneled into Toxic Rick, as the latter had the bit of alcohol on his lip while Healthy Rick didn't. Despite these qualities, however, he was also passionate and protective of Toxic Morty, ultimately sacrificing his independence to save him.

Healthy Rick implicitly described him as being entitled, narcissistic, lonely, and irrational (in his concern for his grandson). This means that regular Rick views these as negative qualities in himself; Rick is both critical of himself for his ego, but also for his attachments, like family. 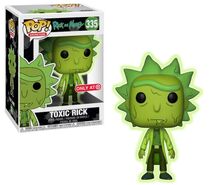 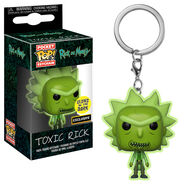 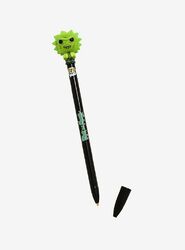