Rick and Morty Wiki
Register
Don't have an account?
Sign In
Advertisement
in: Pocket Mortys, Male Characters, Characters,
and 2 more

This article is about Western Morty. You may be looking for other versions of Morty.

Close Rick-Counters of the Rick Kind
Western Morty, also known as Cowboy Morty, is a cowboy version of Morty who travels with his Rick on adventures and to The Citadel.

Western Morty, as he is a cowboy variation of Morty, looks very similar to Morty, aside from a few differences. He wears a red bandanna around his neck, a cowboy vest, a belt with an oversized buckle and a brown cowboy hat.

This Morty was born and raised in a cowboy dimension with his family and Rick. He often joined his Rick on visits to The Citadel, one of which coincided with the trial of Rick C-137. Morty took notice of his cowboy counterpart passing by, but his Rick dismissed it, saying Morty was easily impressed.

He also appeared in another leaflet where he had built a soapbox race car for the annual Morty Carlo Rally. Though it's not known shown how he placed in the race.

Not going to quit you

“This Morty is from a dimension where a series of very unlikely geopolitical events, coupled with an incredibly popular dance craze, caused everyone to dress like cowboys.”
—In-game description

Cowboy Morty appears in the game Pocket Mortys. He appears in Pocket Like You Stole It 1. 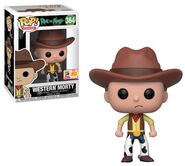