Rick and Morty Wiki
Register
Don't have an account?
Sign In
Advertisement
in: Pocket Mortys, Characters, Male Characters,
and 3 more

View source
watch 02:07
Spider-Man: No Way Home Trailer Dropped - The Loop
Do you like this video?
Play Sound

This article is about Western Rick. You may be looking for other versions of Rick.

Close Rick-Counters of the Rick Kind
Western Rick, also known as Cowboy Rick, is an alternate version of Rick who, along with his Morty, hails from a cowboy dimension.

Western Rick, as he is a variation of Rick, looks very similar to Rick, aside from a few differences. Unlike Rick, Western Rick wears a green bolo tie, a large belt buckle on his belt, boots with spurs, and a white cowboy hat.

Western Rick was on a visit to The Citadel with his Morty at the same time as Rick and Morty of Dimension C-137 was brought in to be judged by the Council of Ricks. They later came to the trial and kept in the far back.

He survived the events of the fall of the Galactic Federation and temporary destruction of The Citadel by either fighting, hiding or not being present at The Citadel at the time.

During the presidential debate, Western Rick was backstage with Salesman Rick and was arguing with Black Rick about something. most likely related to the upcoming election. 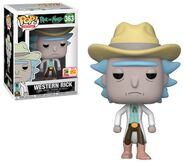